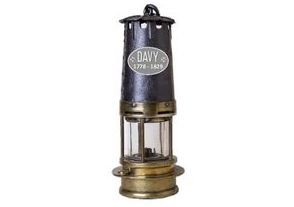 Sir Humphry Davy (17 December 1778 – 29 May 1829) was a Cornish inventor and chemist, born in Penzance, who is remembered today for isolating, by using electricity, a series of elements for the first time: potassium and sodium in 1807 and then strontium, barium, calcium, boron and magnesium the following year in 1808, as well as discovering the elemental nature of iodine and chlorine. Humphry Davy also studied the forces involved in these separations, inventing the new field of electrochemistry.

In 1799, he experimented with nitrous oxide and was astounded at how it made him laugh that he nicknamed it “laughing gas”.He wrote about its potential anaesthetic properties in relieving pain during surgery. He also invented the Davy Lamp, which is the subject of this challenge..

After his return to England in 1815, Davy began experimenting with lamps that could be used safely in coal mines. The Revd Dr Robert Gray of of Sunderland had written to Davy suggesting that he might use his ‘extensive stores of chemical knowledge’ to address the issue of mining explosions caused by firedamp, or methane mixed with oxygen, which was often ignited by the open flames of the lamps then used by miners. Incidents such as the Felling Mine Distaster of 1812 near Newcastle, in which 92 men were killed, not only caused great loss of life among miners but also meant that their widows and children had to be supported by the public purse. The Revd Gray and a fellow clergyman also working in a north-east mining area, the Revd John Hodgson of Jarrow were keen that action should be taken to improve underground lighting and especially the lamps used by the miners.

Davy conceived of using an iron gauze to enclose a lamp’s flame, and so prevent the methane burning inside the lamp from passing out to the general atmosphere. Although the idea of the safety had already been demonstrated by William Reid Clanny and by the then unknown (but later very famous) engineer George Stephenson, Davy’s use of wire gauze to prevent the spread of flame was used by many other inventors in their later designs. George Stephenson’s lamp was very popular in North-East coalfields, and used the same principle of preventing the flame reaching the general atmosphere, but by different means. Unfortunately, although the new design of gauze lamp initially seemed to offer protection, it gave much less light and quickly deteriorated in the wet conditions of most pits. Rusting of the gauze quickly made the lamp unsafe, and the number of deaths from firedamp explosions rose further.

There was some discussion as to whether Davy had discovered the principles behind his lamp without the help of the work of Smithson Tennant, but it was generally agreed that the work of both men had been independent. Davy refused to patent the lamp, and its invention led to his being awarded the Rumford medal in 1816.

Run 50 miles (one mile per year Sir Humphry Davy was alive). Your mileage must be done in a 4 week period between Friday 15th January 2021 and Friday 12th February 2021. Your run(s) must be completed in dark hours using a headtorch, hence “Lamps” on Lockdown, as this ties in with the safety lamp theme. The person who does the 50 miles in the quickest overall time (not the most runs) is declared the winner.

There will be a leader board throughout the 4 week challenge and you’ll be able to add all of your data to the system and view your progress throughout. You can do this in 1 or more efforts.

You’ll have access to an exclusive and all importantly, supportive Facebook group and have complete race director support from yours truly.

There will be prizes for 1st, 2nd and 3rd male and female and bespoke safety lamp medals for all finishers, along with spot prizes for lucky runners.

Support the challenge and get some dark miles in this lockdown!

Further information for this event can be found in the following guides.

How & When to Register

You can enter at any time before the event finishes, obviously the later you leave it, the less time you have to complete it.  Enter using the button below.

Below is the video of the event briefing, please watch to ensure you know all the details of this event.

You can enter you runs for this event via the runners base, you will have received log in details when you entered the event, if not please contact adrian@apbcomputerservices.co.uk

RACE DIRECTORS HAVE BEEN DBS CHECKED & IS AVAILABLE UPON GENUINE REQUEST
BYS VYKEN EVENTS – ‘ASSOCIATION OF RUNNING CLUBS’  MEMBER NUMBER: A173 /  BYS VYKEN RACE TEAM – ‘ASSOCIATION OF RUNNING CLUBS’ MEMBERSHIP NUMBER: 493
BOTH THE BUSINESS & RACE TEAM ARE NOT CONNECTED AND RACES ARE NOT  ORGANISED UNDER THE RACE TEAM BANNER
BYS VYKEN EVENTS & CORNISH TRAILS IS LICENSED TO COPY ORDNANCE SURVEY LTD  PAPER MAPPING (LICENCE NO: 100059449 ) EXPIRING ON 20/11/20
BYS VYKEN EVENTS AND CORNISH TRAILS IS FULLY INSURED AND PROTECTED AND COVERED BY ‘City Underwriters’, ‘Foldgate’ & ‘Cube Insurance’  WHICH SPECIALISE IN NICHE AND SPORTS INSURANCE AND LIABILITY COVER. BYS VYKEN EVENTS AND CORNISH TRAILS IS ALSO PROTECTED AS PER THE A.R.C PERMITS ISSUED WITH EACH RACE FROM A.R.C (ASSOCIATION OF RUNNING CLUBS). INFO AND PERMITTED RACES CAN BE FOUND @ RUNNINGCLUBS.ORG.UK
ALL EVENTS WILL BE MEDICALLY SUPPORTED AND COVERED BY ‘OMEGA MEDICAL EVENT SUPPORT COVER’.